A Wall Worthy of Attention 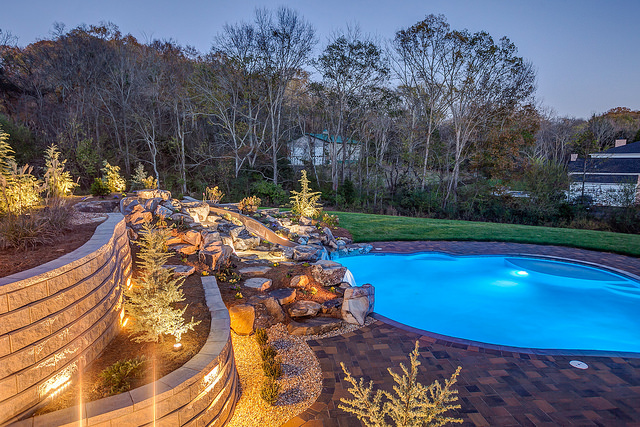 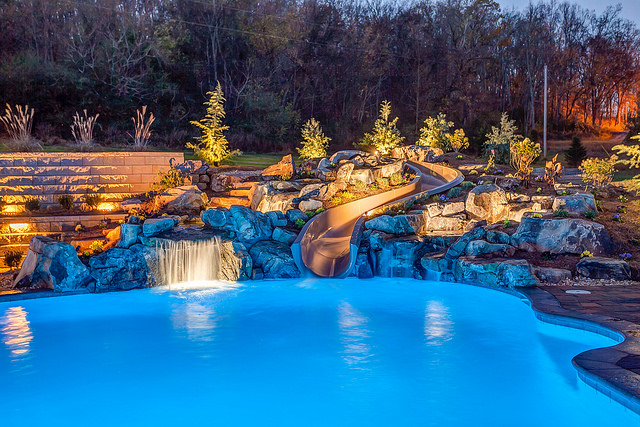 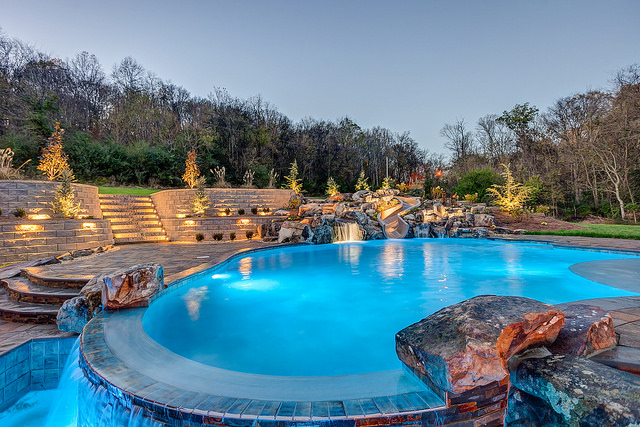 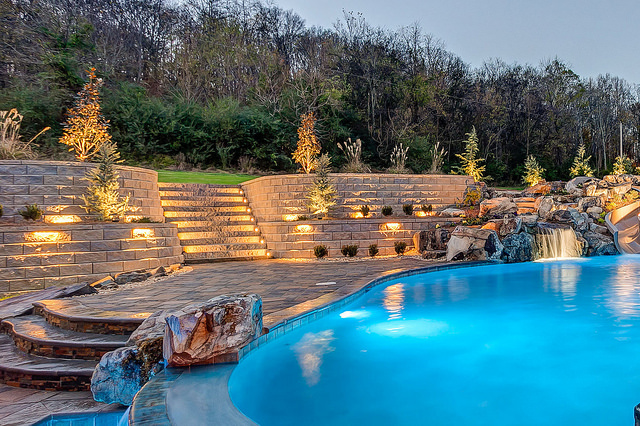 When a family owns the house of their dreams, but it doesn’t come with the yard to match, it’s time to make some changes. The Yarbrough family from Leipers Fork, Tennessee turned to Kyle Peek, founder of Peek Pool & Spa, to transform their unusable yard into an outdoor paradise — and it’s making a lot of people take notice.

Peek met the Yarbroughs at their home, and immediately realized this was going to be one challenging project. The landscape featured considerable slopes in two different directions in both the front and back yards. The family had their heart set on a grand outdoor living space featuring a spectacular pool, fire pit and outdoor kitchen, but didn’t have the space for any of it.

In addition to the difficult-to-access terrain, Peek faced several other hurdles on the project. The Yarbroughs were not going to be at home during construction, therefore several design considerations such as the selection of specific hardscape products and color combinations were left to the contractor. The veteran custom pool builder of nearly 40 years was ready to meet this challenge. Peek called upon GreenWorks Landscaping Design out of Franklin, Tennessee to do the hardscapes installation. He had worked with co-owner Brock Hughey many times in the past, and was confident they would do a great job.

Once Peek and his son knocked down the 50-foot (15.24 meter) wide slope, they turned to Hughey and his business partner Dennis Fioravanti at GreenWorks to erected a 10-foot (3-meter) tall, 1,500 square foot (139.4 square meter), terraced segmental retaining wall (SRW). The wall leveled out a considerable portion of the yard. “There are lots of hills where we are, almost every job we do includes retaining walls,” said Hughey, “this one was a little more complicated because of its size, but we do so many of them it wasn’t a problem.”

When asked about the challenges the site posed, Hughey said “One of the big challenges for us were the cameramen and the drones, we didn’t want to kill them while we were building the walls.” To allow work to get started on other elements of the project, the wall had to be built quickly. “Four of us built that wall in three days. We stayed out there long days,” Hughey said.

Slope Differences were Made Assets with the CMU Wall

A grand staircase was incorporated into the wall to give access from the home to the new outdoor living area. “It wasn’t originally incorporated in the original design. We made that up halfway through the wall. We decided to do that and made it happen.”

The base for the construction of wall consisted of an 18 inch (45.7 centimeter) deep bed of gravel mixed with decomposed granite, which was installed in lifts that were wetted and compacted. The base course and about half of the second block layer were placed below grade. The 8-inch (20.3 centimeter) high by 18-inch (45.7 centimeter) wide wall blocks chosen for the project were in a driftwood color. Peek estimates about 40 pallets of wall block and caps were used to build the wall.

The radical slope that needed to be retained and the size of the SRW demanded that quite a bit of engineering was required to construct the pool and wall. Geogrid was used to reinforce the wall. Nearly 30 trucks delivered 840 cubic yards (642.2 cubic meters) of gravel to the site for backfill and drainage behind the SRW. The terraced walls were built to be dependent on one another (close enough that they affected one another), and the drainage for both walls were tied together. Peek explained that the project didn’t necessarily require a terraced wall system, but it did provide an opportunity for an additional level of plantings to enhance the aesthetic beauty. Hughey went on to explain that “We built the front wall first, backfilled it, and built the top wall on the materials for the front wall. There were compaction rates that needed to be achieved throughout the process. That’s how we normally build walls, with terraces, so landscaping can be incorporated into the project.”

Even after installing this sizeable wall, the outdoor living space was still going to require additional levels to accommodate the remaining slope. Peek designed the pool and pool decking to seamlessly transition these level changes. At the top of the pool, a spectacular multi-tiered waterfall was constructed with more than 80 tons (72.6 metric ton) of boulders, which blends seamlessly with the SRW. In the middle of the waterfall a winding 35-foot (10.7-meter) long custom-built water slide empties swimmers into the 8-foot (2.4-meter) deep end of the pool. At the other end of the pool is a dramatic vanishing edge at the zero line. Hughey said that GreenWorks “was in charge of making the transition of the SRW with the boulder waterfall.”

GreenWorks also installed the pool deck. The design called for 2,100 square feet (195 square meters) of mixed pavers. A couple of staircases flank a stunning curved waterfall at the pools vanish edge. This is where Greenworks also installed a circular free standing seat wall around a fire pit. “GreenWorks stepped up and quickly built a pergola over the outdoor kitchen area at the last moment,” Peek said.

Peek designed several touches to finish off this project. Kichler brand lighting were installed on the staircase risers, within the wall, on plantings and in water features that allowed for a spectacular nighttime effect.

After 60 days, and 50 different people, working on the project, the Yarbroughs returned from their trip overseas to a beautiful back yard that they fell in love with instantly. In addition to the attention this project received with the airing this last spring of Pool Kings on the DIY Network and feature articles that showcased the project in various publications, this project was recently awarded with the coveted 2016 Hardscape North America (HNA) Hardscapes Project Award for Segmental Retaining Walls – Residential Category. Hughey said “We tried to give the homeowners everything we could for the budget. The HNA award was unexpected. One of our suppliers nominated the project, and a couple of months later we were on stage in Louisville accepting the award.” This annual award recognizes outstanding hardscape projects and was awarded in October at Hardscape North America, the industry’s largest trade show in North America. “We always go check out the new stuff at HNA, it’s a great show. We were able to show up, and win the award.”

The National Concrete Masonry Association is a sponsor of the HNA Hardscape Award and endorses the tradeshow. Entries were judged on several factors including project intent, design, quality of construction and craftsmanship, compatibility with related construction materials and systems, construction innovation and overall design excellence.