Seeking a 50-year life expectancy, along with a requirement for low-maintenance building materials and structures on base, the Department of Defense relies on loadbearing masonry envelopes for the new buildings on the Marine Corps Base at Camp Pendleton, CA. And with tight site restrictions, the concrete masonry helps reduce use of the limited land available by minimizing the building standoff distances from parking and roadways set by blast resistance standards. It also protects life and property, thanks to its resistance to fire, seismic and other extreme loads. 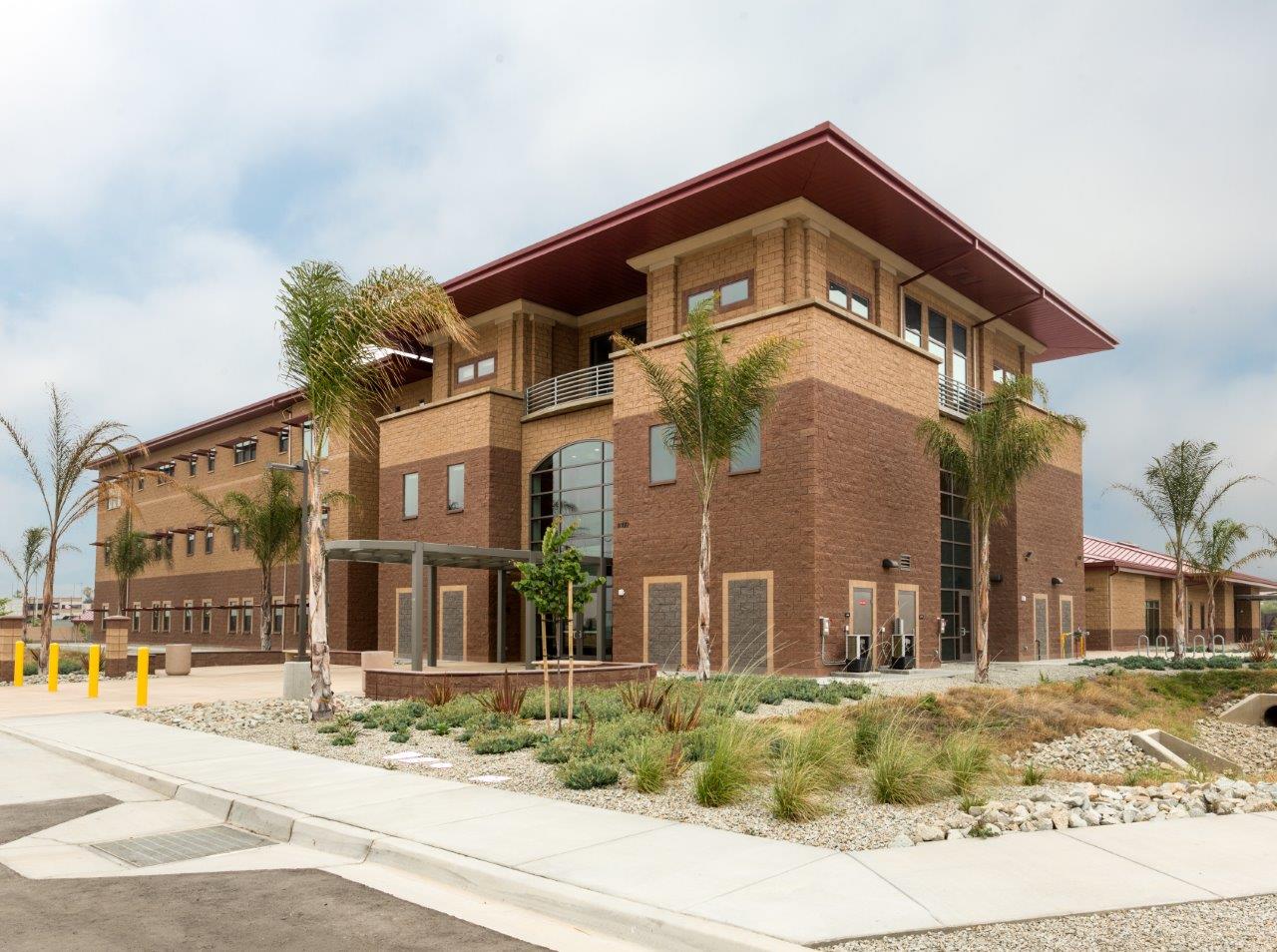 Seismic design and blast resistance sometimes go hand-in-hand. The structural reinforcement requirements of the seismic design of the concrete masonry offered substantial benefits, including blast resistance, over typical metal studs, according to Bachelor’s Enlisted Quarters (BEQ) Campus Designer of Record Rob Bodenhamer, of Vasquez Marshall Architects. Although the intent is to keep a blast threat as far away from occupied buildings as possible, that isn’t always feasible. The BEQ campus Fitness Training Center is an example. It was not possible for all façades of the building to be at a far enough distance from the parking and roadway. There are a few strategies to overcome this issue, he says, including additional reinforcement in the walls—already necessary for adequate seismic design.

As part of the seismic design, any Camp Pendleton building three stories or higher had to be designed to factor in protection against progressive collapse. Standoff distance is one factor, but the buildings need to provide structural system continuity, according to the earthquake standards, and must offer redundancy among structural components that will aid in limiting collapse under the extreme loading events of an earthquake.

Concrete masonry was particularly good at avoiding that, according to Bodenhamer.“Shear walls were all reinforced masonry set perpendicular to the perimeter,” he said. Resistance to progressive collapse was provided by the walls set on the sides of the envelope.“It was really easy with the masonry by just reinforcing adjacent and perpendicular walls with extra heavy reinforcement,” Bodenhamer said.

One of the benefits of concrete masonry is that it does not burn. With masonry envelopes and masonry interior walls, the BEQ campus buildings are fire safe. CMU interior party walls—the walls between dwelling units—in the five-story residential building create a containment system that will limit the effects of fire and smoke damage in a fire event (compartmentation).

Creating a fire-resistant interior perimeter to separate living units (dorm rooms, apartments, larger dwelling units) restricts the spread of fire by dividing a building into fire compartments fully enclosed by firewalls or fire separation wall assemblies, and by fire-rated floors and ceilings. Compartments also inhibit the spread of toxic fumes and smoke to adjacent areas of a building. The CMU walls in the residential building in BEQ are a fire safety feature that protects occupants and avoids physical damage to the building.

Masonry walls between dwelling areas, as well as occupied spaces in other building types, create what is known as passive fire protection, and that factored into the overall design approach for the BEQ campus buildings. Through passive protection, the masonry walls contribute to a containment system intended to limit the spread of fire and the extent of smoke penetration to the area of ignition until it can be extinguished.

The passive fire protection offered by concrete masonry walls can also provide a refuge area when evacuation is not immediately possible. Floor and wall elements forming the boundaries of each compartment should have a minimum fire-resistance rating of two hours. Openings through compartment boundaries should be protected openings. In multifamily housing, each dwelling unit should form a separate compartment.

“The masonry’s inherent fire-resistive capabilities and structural characteristics helped to meet the construction requirements and comply with base architectural design standards,” said Bodenhamer.

Bob Miller, President of Wildman & Morris, Ramona, CA, managed the security design of the BEQ campus buildings. Miller says the campus was designed under an older blast-resistance standard than what is in use today, and all of the new buildings had to be set back from any vehicular areas by a minimum of 82 feet (25m), an across-the board requirement, regardless of the structural system. But while work was under way at Camp Pendleton, DOD updated its “Unified Facilities Criteria DOD Minimum Antiterrorism Standards for Buildings.” 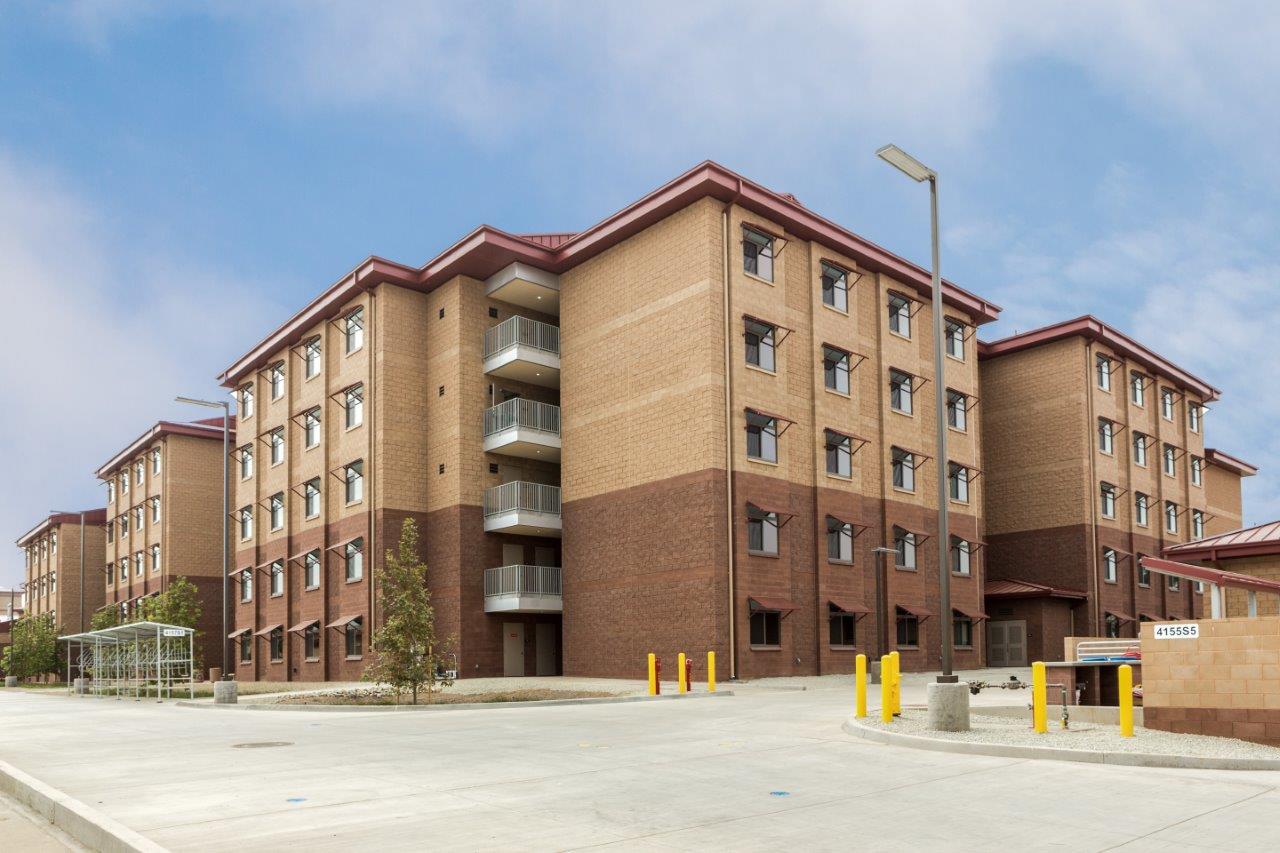 At a military base, most threats come from roadways, parking areas and trash receptacles. That is often the case with private buildings and other public structures as well. The security design approach is to use the lowest level of protection possible by keeping the threat distant from the buildings. Conventional construction materials offer various options on the distance, and thus the amount of land employed for protection. On a controlled perimeter facility like a military base, the distance required between a reinforced masonry envelope and a parking area is 30 feet (9.1 m). That compares quite favorably with a metal stud wall covered with stucco at 151 feet (46 m) and with metal studs with brick veneer at 75 feet (23 m). For uncontrolled perimeters the distances all increase significantly.

Windows and doors are a real challenge. “Everyone looks at the wall and roof system, but almost nobody looks at door and window control,” Miller says. The typical window on the base is dual-paned, with the outer pane being annealed glass and plastic laminate on the inner pane. According to Miller, that really determines the security setback distance. “Doors need to be at a 30-foot (9.1-m) standoff, windows at 35 feet (10.7 m). It turns out, setbacks for the typical economical window and door are right there with the reinforced concrete masonry wall system,” providing security and aesthetics at some of the closest distances to parking.
The military’s selection of concrete masonry for envelope and structural systems provided a visual cohesiveness to the base. The reinforced masonry helped keep costs down, met seismic requirements, provided blast resistance while minimizing the land area needed as a protective buffer, and offered more fenestration options than possible with any other system. The Marines are looking forward to 50 good years in these buildings