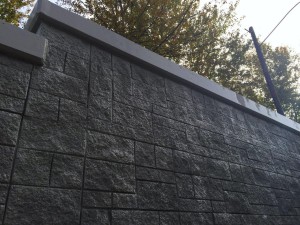 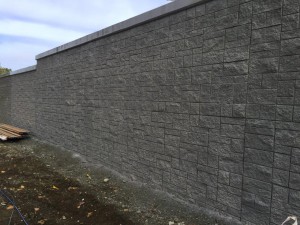 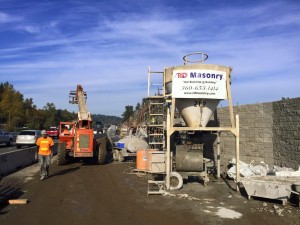 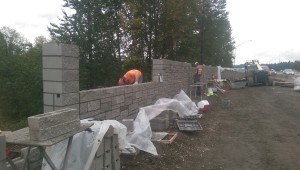 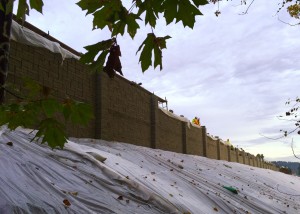 You often see noise barriers or sound barriers (as referenced in other parts of the country) that line busy roadways constructed from precast concrete panels or tilt-up concrete walls. However, the Washington State Department of Transportation (WSDOT) required something completely different for this stretch of Route 167 in the corridor between Tacoma and Seattle.
This nearly two-mile-long sound barrier is constructed of concrete masonry units (CMU), something that Jim Reynolds, the general manager and safety director of out of Marysville, Washington, hasn’t seen constructed for at least 20 years on the west side of the Cascades.

Not only do the CMU blocks meet all of the WSDOT requirements, but their use solved some other issues as well. “The soils in the area are just too soft for tilt-up concrete walls,” Reynolds said, “and to use them they would have to dig down so much to install footings for precast panels.” He then explained that in order to do that, the general contractor Atkinson Construction of Renton, Washington, would have shut down lanes of traffic on the busy freeway disrupting the commute between Ellingson Road and 15th Street SW in Algona. “They would have been forced to bring in a crane for installation. Space is limited in the area” said Reynolds. He went on to say that they could have worked on the project at night, but the traffic interruptions, construction lights and noise would have disrupted the very neighborhoods they were building the wall to protect.

A Pattern to Prevent Graffiti

Another major factor for WSDOT is the prolific graffiti in the area. “Planners wanted to utilize surfaces that discourage graffiti, and materials that can be easily painted over in the event the wall does get tagged” according to Reynolds. “So we proposed a 6-inch wide double-sided split face block.” R&D Masonry recommended the texture and the use of an Ashlar pattern, both of which would discourage vandalism.

Don Kenney, president of R&D Masonry, said “Ashlar bond jobs constructed out of CMU break up the surface and provide more joints and more relief, which makes tagging less desirable.” WSDOT was very happy with the solutions, and wanted even more features such as raked joints between the blocks that CMUs were able to incorporate according to Kenney.

Larry Smith, the project manager from Atkinson, stressed that teamwork among all of the groups involved in the project helped make it a success. “Everyone worked together to ensure the state’s standard plan was met. We came up with a workable design and build plan. We worked out the pattern. The team at R&D were engaged from the start, they built wall mock-ups to present to WSDOT for approval.”

Shaklawun went on to say that some people in the community voiced concern that such an aesthetically pleasing wall constructed from CMUs must cost taxpayers more than conventional precast panels. “We explained the design/build process and that the project cost was comparable to other materials. And since we didn’t have to disrupt traffic to install the wall, it was a good solution.”

Reynolds explained that the minimal excavation, the fewer footings and the reduced labor made this an efficient solution. “We were able to complete the project much more quickly.”

Smith also addressed the cost issue. “There’s an economic benefit of using local labor on site to build the wall. Fabricated walls are made somewhere else, they don’t pay prevailing wage or stimulate the local economy,” he said.

Atkinson dug a footing every 14 feet (4.3 m) for pilasters constructed from 16-inch square column block filled with 6,000 psi (41.3 kPa) grout, rebar and lateral ties. The CMUs manufactured by local producer were placed on a 2-foot (61-cm) deep leveling pad made of free-draining aggregate. “We went with gray block that was stained Washington Gray” said Reynolds.

The wall sections vary from 8- to 20-feet (2- to 6-m) tall. “We built scaffolds on both sides of the wall and laid the block in sections. I gave each of the guys a laminated card that showed them the repeating six-piece pattern (since this was a complicated pattern),” said Reynolds. Eight-inch (203 mm) tall blocks used as bond beams were placed every 32 inches (81.2 cm) vertically and reinforced the wall sections. The total project was made up of 190,000 units. “We had a crew of 30 to 40 mason contractors lay about 4,000 blocks a day.” R&D was on the job working six to seven days a week to meet the schedule.

Tom Young of the Northwest Concrete Masonry Association thinks the noise wall (sound wall) market is a perfect extension for CMU manufacturers in the Northwest. “We’ve worked hard to convince general contractors in the area that masonry has several advantages,” he said. “The association has produced standard design plans that meet the state’s requirements, and we’ve put preliminary cost figures together to demonstrate the cost effectiveness of masonry.” Tom also knows the importance of promoting the aesthetics of concrete maosnry walls. “I went to California, the center of the CMU noise wall universe, and took lots of pictures of walls to show to planners in our state the many design possibilities.”

The Algona wall was finished off with a cap constructed of 10-inch (245-mm) wide hollow blocks that overhang the wall by 2 inches (50.8 mm) on each side. “Originally they were going to pour the cap in place, but they couldn’t keep up with us,” said Reynolds. Once in place, the cap blocks were filled with grout and rounded on top. “We even scored the columns by grinding false joints to match the pattern. I know WSDOT was very pleased with the end result.” Reynolds is confident that planners will build more walls in the area using the same product.

Reynolds indicated that the unexpected element of the project was the reaction by the community. “We actually got calls from people who live in the area, they would see our construction sign. They called to thank us for building such a beautiful wall in their neighborhood.” The beauty of this new wall is that not only has it greatly reduced traffic noise for residents, businesses and churches in Algona, but that it reduced the impact on the environment, avoided disruption to traffic and saved taxpayer money.

“Everyone from the people at the transportation department to commuters and the people who live in the area love the look. It really stands out, and gives our industry great exposure” said Kenney.