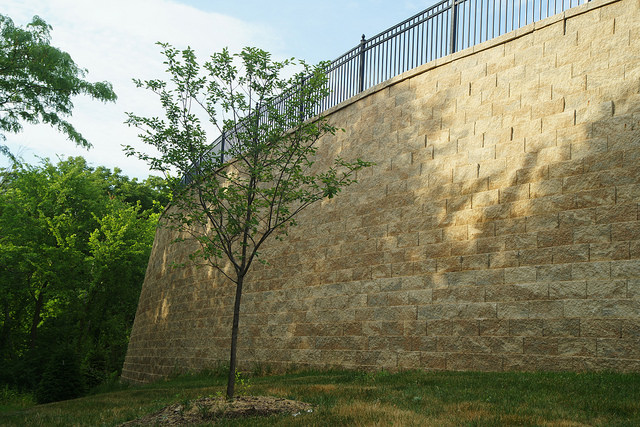 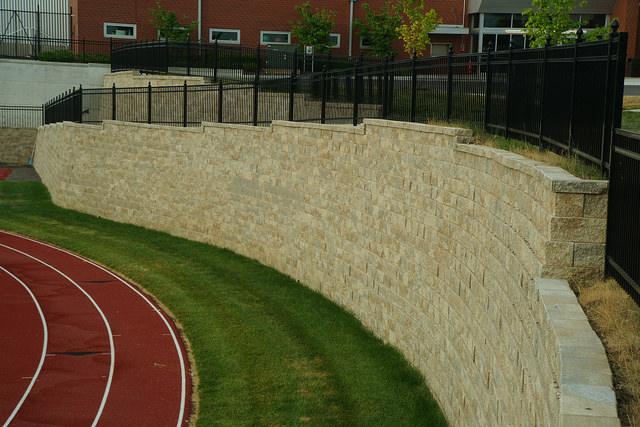 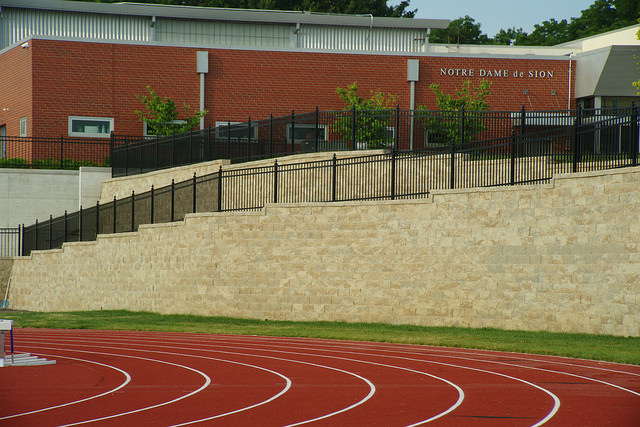 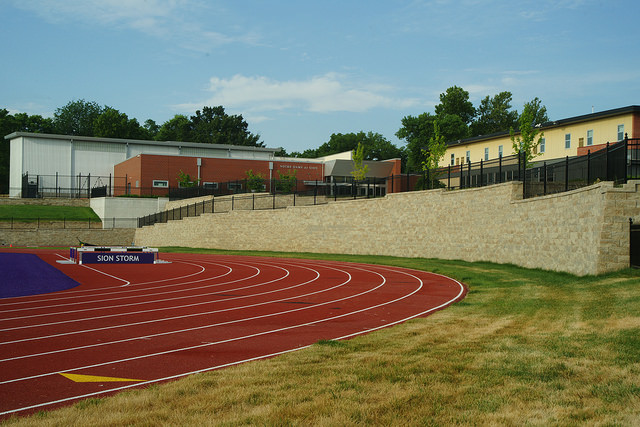 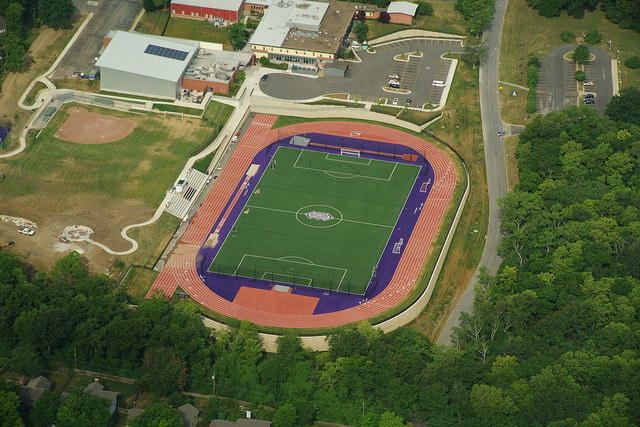 The school turned to Pete Brown, vice president of Kissick Construction of Kansas City, to be the design/build general contractor for the project. Brown definitely had a rooting interest in the project, as his daughters attended the school. The architect on the design team, Jennifer Goeke, also served as a member of the school’s board of trustees. “That amount of money is hard to come by for a private school. Our team’s job was to be good stewards, and to design something that gave them the best bang for the buck,” Brown said.

The footprint of the available land was just big enough to fit the proposed complex, which sloped down to a nearby wooded area near a residential neighborhood. Brown explained, “It was a very tough site. Tiny. The elevation changes were very difficult, and that is where some really out-of-the-box thinking, some creativity, came in. And that’s why early on the job I brought in Dwaynhttp://cmd.ncma.org/wp-admin/post.php?post=892&action=edit#e Lewis. I wanted him on our team from day one.”

Dwayne Lewis, president of Lewis Block & Supply Company and J&S Structural Engineers, was tapped to erect substantial reinforced segmental retaining walls (SRW) utilizing mechanically stabilized earth (MSE) technology. “To make this athletic field work properly with the site constraints we had was going to require some significant walls,” according to Brown. “They needed to perform and to look right as this was a critical component of the project, and I trusted Lewis Block would accomplish this.”

Brown went on to describe Lewis Block and a classic small business success story. Kissick had been working with Lewis Block for about five years, and “because of a great attitude and a great technical skillset, Lewis Block has grown as a company. He’s hard working and shined for the client,” Brown mentioned.

Lewis knew that this was going to be a special project, and he took some extra precautions to ensure its success. He welcomed the involvement of the project’s civil engineer, Olsonn Associates, to inspect the wall’s installation along the way, and to make certain his installers were following the engineer’s plans to the letter.

Saving Time and Space for the Playing Field

Lewis was appreciative that the block manufacturer offered to send Randy Miller, president of AIM Paving & Construction, from Arlington, Texas to Kansas City to consult with him on the project. “His insight proved to be invaluable with all of his years of wall building experience,” said Lewis. Miller gave a series of tips on everything from effectively laying and screeding the base, to building the wall in 150-foot increments, to systematical methods of core and backfilling. Lewis went on to say that “64 to 67 percent of the time for an install like this one is spent backfilling. Randy recommended efficient ways to get the backfill to various locations as we needed it. We used conveyors and rented a wheel loader that dumped five tons of backfill at a time.” Lewis is convinced that Miller’s advice saved him at least three weeks on the project.

On the upper portion of the site, a large SRW supported a new parking lot and framed a walkway that leads down from the parking lot to the concourse. The lower portion of the site sported a long curved wall that supported the track and field. The wall, which was constructed with the Anchor Diamond Pro retaining wall system in sand blend color, measured 18,880 square feet (1,754 square meter), and the tallest part of the wall measured 24 feet (7.3 meters). The leveling pad required 150 tons (136 metric tons) of AB-3 crushed limestone, and 13,500 tons (12,247 metric tons) of ¾-inch (2 centimeter) clean gravel that was used for backfill. About 2,500 linear feet (762 meters) of perforated drain pipe was used. Some 85 rolls of Miragrid brand geogrid were installed, the longest length was 21 feet (6.4 meters) that is 87% of the wall height; and 32 rolls of Mirafi brand filter fabric was positioned. It took an average of eight operators 82 days to install the wall portion of the project before the parking lots and the field could start.

Brown indicated that cost control was the primary reason SRW was specified for the job over other earth retaining methods. He also said that the wall block complemented the modern-looking architecture of the campus. “If it was the MSE of 15 or 20 years ago, I probably wouldn’t have selected it. The industry has done a great job of offering lots of options and these wall products have come a long way,” he said.

Tracy Yunger of Pavestone was thoroughly involved in the process. “She attended several planning meetings and presented several block options and designs that the architect, engineer and owner could get behind. I wanted them to be comfortable with the look,” Brown said. He went on to explain that Yunger held a lunch and learn session at the architect’s office and made a presentation on the industry, “she did a fantastic job,” Brown added.

After the completion of the project Brown was very proud of the entire team, however he was particularly excited for Lewis Block, who won the 2016 Hardscape North America (HNA) Hardscape Award for Commercial Segmental Retaining Wall for this project. “When Dwayne told me about the award, I immediately sent an email to everyone who worked on the project and the school staff, I wanted everyone to know the wonderful job Dwayne and his staff had done,” Brown said.

“It’s definitely a badge of honor,” Lewis said of the award, “we have gained some bragging rights. We’ll use this award to promote our business. We will use it in our marketing, and our bids will feature a statement about this prestigious award.” You could tell he had a great big smile when he said it.

The annual HNA Hardscape Award recognizes outstanding hardscape projects and was presented in October at Hardscape North America, the industry’s largest trade show in North America. The National Concrete Masonry Association is a endorsing organization of the HNA show and Hardscape Award. Entries were judged on several factors including project intent, design, quality of construction and craftsmanship, compatibility with related construction materials and systems, construction innovation and overall design excellence.