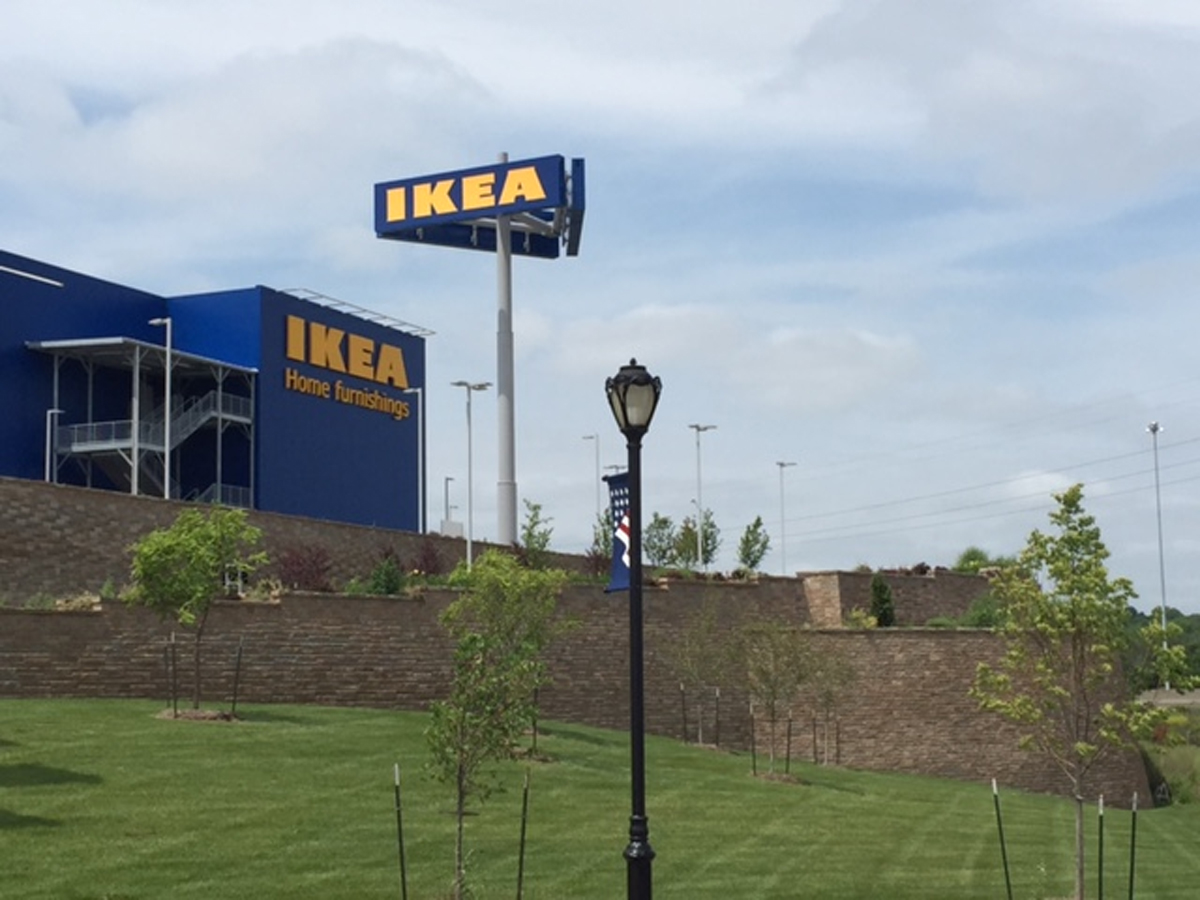 Segmental Retaining Walls (SRWs) were utilized to make an unusable parcel of land in the middle of a busy retail district become an attractive location for one of the world’s largest furniture retailer.

Every retailer knows location to be the key to success. Merriam, Kansas, a southern suburb of Kansas City, had all of the makings of the right location. The decision for a major retailer to locate there hinged on high traffic counts, good household incomes and the perfect parcel of land.

The latter, however, was quite hard to find in the area, as usable land was scarce. The people at Developers MDT Development and Developer’s Diversified Realty One recognized the potential of an available property, but they also realized it required some work before any retailer could move in. Before development, this property was little more than a slope adjacent to Interstate 35. In order to create the perfect retail location, they were able to construct an enormous plateau using a geogrid-reinforced segmental retaining wall system that reached heights of up to 44 feet (13.4 m).

Five separate walls were constructed to create the retail space named Merriam Village. Shafer, Kline & Warren (SKW) of Lenexa, Kans. designed the project. The walls were built with several terraces, planters, serpentine curves and pilaster bump-outs—a SKW signature feature. Freestanding columns were spaced at the top of the walls, and fencing erected between them.

Backfill made from processed onsite material was used in the geogrid reinforcement zone, however as construction continued over the winter months, backfill was switched to clean aggregate. Some of the geogrids were as long as 40 feet (12.2 m). More than 100,000 tons (90,718 MT) of gravel was brought in for the reinforcement zones of the wall.

Inclined roadways leading up to the parking lot atop the plateau were lined with planters built with the retaining wall blocks. These planters sat 3 feet (1 m) above grade on the tops of walls that supported roadways providing aesthetic landscaping, but also acted as traffic barrier guardrails along the road.

Michael W. Stein, P.E., Team Leader, Structural for SKW indicated that an SRW system was their first and only choice, “Even though the project had a large magnitude with a 60- to 70-foot (18- to 21- meter) grade change across the parcel,” he said. Alternative methods such as sculpted gunite with soil nails or shored pilings to retain the cut and fill portion of the site weren’t considered. Stein went on to say, “The main factors to use an SRW system were the constructability, aesthetics and cost effectiveness, in that order. In addition to the large space created for a retailer on top of the plateau, the wall also supports city offices and a city park, so the aesthetics of the wall was important.”

It was important to the developer that the 120,000 sq. ft. (36,576 m2) wall mimicked natural stone in order to give the project an old-world feel, which went well with the old-town Merriam charm, a historic district. Multi-sized retaining wall units with a weathered texture were chosen to closely resemble the natural limestone outcroppings found in the Kansas City area.

All the site needed was a tenant. A national electronics store was originally going to locate there, however it went out of business before they could occupy Merriam Village. That’s when the Swedish home furnishings retailer IKEA decided the site was perfect for one of their colossal-sized stores. They attribute the decision to open in the centrally-located Merriam Village, in part, because of the massive wall dubbed the “Great Wall of Merriam.” It gave their store tremendous prominence and incredible visibility from the freeway. The wall also supports a car dealership, a police station and other retail stores.

The project consists of retaining wall blocks measuring 6- and 4-inches (15 cm and 10 cm) tall. The wall was installed using a pattern of these blocks to form a 24-inch wide by 10-inch tall (261 cm by 25 cm) section, otherwise known as a panel. These panels were installed in a staggered fashion to maintain bond and to give the wall a random appearance. “The wall met everyone’s objectives, and allowed for maximum development space on site,” Stein said. He went on to explain that there were a couple of phases to the project. “We had to re-work significant portions of the wall when the original tenants were replaced by IKEA.” Some walls were relocated, and they were able blend in seamlessly with the walls that were originally installed. The Great Wall of Merriam helped create the perfect retail location.